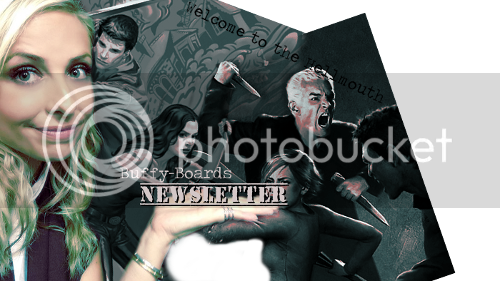 New to BB - these are the places to go! Check In; is where you introduce yourself (now don't be shy, we know you want to and we want to know!), Bad Eggs; is where you find guidance ... we all need a little help from time to time, so who best to help you than your very own personal guide to BB? Last but not least Angel Investigations - is where we help the helpless! If you still find yourself with unanswered questions after reading through the FAQ, then this is your next stop. Have a browse through the forum and see if other people have already asked your question and find your answer and if you still need to know something then start a thread in Angel Investigations and we will answer it ASAP.

Please be sure to read the FAQ before you post. Help | Buffy-Boards

Please remember that all member avatars MUST RELATE TO THE BOARD THEME (Buffy, Angel, Firefly, Dollhouse, Dr. Horrible). (Off topic custom avatars may only be used by board staff. It is a 'perk' for the work they do.)


Scooby Spotlight!
Y’all haven’t missed our new weekly member feature, have you? Who’s turn is it on the hot seat? Who wants to play 20+ questions? If you’re interested, and haven’t already signed up, PM Buffy Summers or Taake to get on the list. 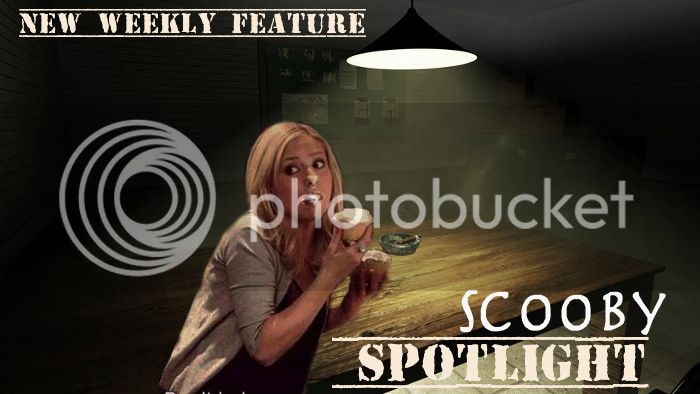 New Weekly Feature: Getting to Know You (Scooby Spotlight)


Ho, ho, ho… Christmas is coming so keep your eyes out for Christmasy releated themes

That old gang of mine

This popped up on Netflix recently, I’m just going to leave this here under the title:
Aly what were you thinking? 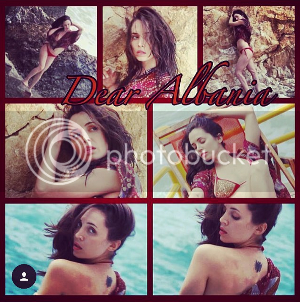 Dear Albania!
Eliza and Nate Dushku’s documentary is screening. Watch to learn as much as they could about their father’s native country!

It was a big month for Eliza Dushku who announced on Instagram and Twitter and she had reached her seventh year of sobriety with the hashtag # twelvesteps! Stay strong, Eliza, keep up the good work J


Charisma shared this lovely pic of herself and some old Angel/Buffy pals! 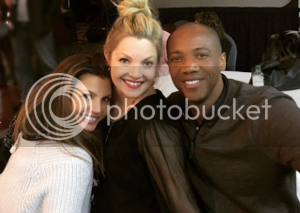 
Once More with Feeling
The internet brought you Joyce and oranges (A Passion for oranges) ... now here are some more fun Buffy fan theories…

The cheese man as a metaphor beautiful monsters: Ah ha!

Who remembers, or doesn’t remember, the Buffies! Yup, it’s true, BB used to have a very formal award event, a grand event for members and moderators alike. Have a peak in this thread to see what kind of awards you could nominate, or be nominated for The Buffy-Boards Awards 2012 and lets cheer for a Buffies revival!

This is the reason why SMG was a bit ‘star struck’ by Tony Head at the start of Buffy, who else remembers these?


Who do you prefer Poofy with original Giles


or Buffy the Umpire Slayer?


Quote of the Month

Wildfly said:
I am not sure Buffy (flawed, strong, feminine, independent) is a normal, typical character abundant in our pop-culture. Alas, fems usually aren't portrayed as complex characters. I was surprised how many many favourite shows and films of mine failed even the simple Bechdel test.

1. damsels in distress, they usually presented more like a reward to the hero than an actual person

2. macho characters like Furiosa from mad max or Ellen Ripley from alien.


'normal' strong females as Buffy and Willow, are rare and so very precious to me

and when i got curios and googled interviews with joss on the subject i remember him saying that he is frequently asked why he created such a strong female character as Buffy,

which for him was a redundant question, the real wringer being why such a role for a female even warrants a question.


some might say that the idea that a slayer(s), who confronts the forces of darkness and defends the people is just another proof for the show being feminist,

until you remember that they're created, 'watched' and controlled by the council which is definitely male authority theme... then again, Buffy is pretty independent and defies the council,

(josh in general has problem with government and politicians, unsurprisingly it seems they're mostly an evil and corrupt influence like the major or the initiative). So i think this whole situation in Buffy is his take on our reality...


for me BTVS (ATVS less so) undoubtedly is one of the rare shows that portray and present females and males according to feminist standards (sometimes we forget that feminism is also against male objectification) so i was happy that they didn't make Xander overly macho, but a real teenager with a real set of problems). Sure, he is still looks Hollywood comely, but that's for another discussion...


I admit that later we got too much macho shirtless Angel and Spike goodness (both whom i love, btw and by no means i am complaining, mind you ) and the show's focus shifted, but well... we can't really blame joss for following public opinion and giving fanservice, now can we? the public gets what the public wants.
Click to expand...

…and an equally good set of points made by Dr Q

Dr Q said:
I've only watched through the middle of season 6, so this may change, but . . . I don't see any feminism here. I see a lot of female stereotypes -- the whole joke of Buffy is that she's a brainless bimbo who suddenly gets superpowers. She's not stupid, but not particularly intelligent, so no threat there. She has no career goals, no aspirations, no self-direction. She's under male control and has to have a man in her life to make her complete. Nothing particularly feminist at all in this

Willow -- she's smart, so she must be socially awkward and sexless. She even tutors the football player. And once she gets a little power, as a witch -- she also becomes a lesbian, is driven made by her power (Dark Phoenix, indeed) and . . . apparently something more happens later this season. In any case, right now, she's in rehab.


Cordelia? The prom queen. Anya? Every man's worst nightmare -- the psycho ex-girlfriend. Joyce? Could she be more 1950s idealized mother? And then she dies.


Sure, Xander is inept and socially awkward -- except that somehow he becomes the foreman of a construction company and a master carpenter. Notice that none of the women have jobs, except Anya? Certainly no career aspirations.


How many of the Council are female? I don't recall any. And certainly not half. So far, we haven't seen any of the coven in England. Just Giles, speaking for them.


Sorry, but this is not in any way feminist.
Click to expand...


This is one of them.


S6 is, according to Joss, about dealing with life, so Buffy is handed the financial boogeyman on a platter. All the shoulda, coulda, wouldas would have gotten in the way, so we are asked to accept it.


Seeing as how we regularly buy into all the fantasy of the show, I guess I will manage to swallow this one...even though it's bugged me more than most issues on the show. It's a powerful example that dealing with real life can be even harder than facing the spirit world, and that Buddy's super powers are useless against it. One more way to remind us how alone she is, or at very least perceives herself to be.


Some of it is attributed to Buddy's moral high ground. She refuses financial help from Spike, because obviously it would be ill gotten gains, and it would have put her in a situation of obligation to him. She turns down Anya's suggestion she charge for her svcs on moral reasoning.


Interestingly she takes money from Giles...though his money essentially comes from being paid for doing a job that saves the lives of innocent people. I guess it's cleansed by being one level removed from the actual hands on slaying.


Police, firefighters and ems workers are paid for life saving...so maybe the moral issue only applies to mystical issues. We are consistently shown that there is a different sort of "economy" in the mystic world.


Watching the show week to week is a vastly different experience than binge watching and re watching. Sometimes things are presented in awkward ways or we are beaten over the head with themes because it's assumed that at least a week has gone by since we've seen the characters, that we may have missed an episode or two and need to be reminded etc.


I try to keep that in mind. We have the entire series set in front of us. Most of us have watched it umpteen times. I know those characters better than I know most people I see everyday. When the show first ran the writers had to address the challenges of week to week forgetfulness, people who came to the show without the benefit of having seen the first five seasons etc.


These issues bug me as much as anyone, and they make for great discussion. Re binge watching the show this past month has me bristling and cringing over lots of this kind of stuff. I'm trying to handle it gracefully, but I was shouting at the screen about this very subject just a few days ago.


I'm a Spuffy, so personally...I would have taken Spike up on his offer, but Buffy couldn't and shouldn't have. Would have ended up like some twisted form of prostitution given their relationship, which was already twisted enough.
Click to expand...

Blast from the Past: 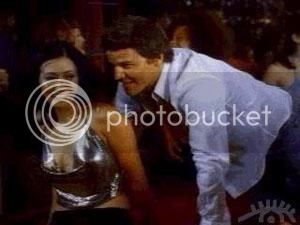 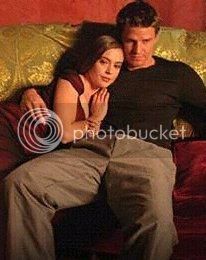 Leave your comments below!​
S
Spanky
The newsletter picture is awesome.. it really encapsulates the forum. hahah

thetopher
Ooh! Buffies is a GREAT idea. :) Plus I liked ASH as the coffee guy- led him directly to finding work in the US.

Location
The City of Angels


Taake said:
It was a big month for Eliza Dushku who announced on Instagram and Twitter and she had reached her seventh year of sobriety
Click to expand...

Sobriety? From what??? That's a surprise for me.

gite63 said:
Sobriety? From what??? That's a surprise for me.
Click to expand...

Member of the Church Of Faith

gite63 said:
Sobriety? From what??? That's a surprise for me.
Click to expand...

Murder rehab...Oh, wait. That was Faith.