Welcome to the Buffy Boards Newsletter! Grab some popcorn, take a seat, and enjoy…

New to BB - these are the places to go! Check In; is where you introduce yourself (now don't be shy, we know you want to and we want to know!), Bad Eggs; is where you find guidance ... we all need a little help from time to time, so who best to help you than your very own personal guide to BB? Last but not least Angel Investigations - is where we help the helpless! If you still find yourself with unanswered questions after reading through the FAQ, then this is your next stop. Have a browse through the forum and see if other people have already asked your question and find your answer and if you still need to know something then start a thread in Angel Investigations and we will answer it ASAP.

Please be sure to read the FAQ before you post. Help | Buffy-Boards

Art Contest
Keep your eyes open in Joyce's Gallery, the third round of icons has just been due and voting should commence soon!
Joyce's Gallery

Tutorials
You haven't missed that @GwenRaiden is tutorialing (pretty sure that's word) have you? Visit the gallery to learn some gimp tips and tricks and how to make awesome icons!
Gimp for beginners? Tut/guide to resizing, blending, colouring and text. Icon tutorial: colouring


Message from the Staff:

Episode 19: Stormtrooper Shooters' Academy, Class of 2000
Welcome to the final part of our Faith four-part adventure where we look at the Angel Season 1 episode 'Sanctuary'. It seems like only yesterday we met Faith, she was so deadly, so evil, so into torture.... and now she's so innocent and naive, and under Angel's protection, which doesn't go down well with his friends... y'know, the friends she beat up and tortured? I mean, what is Wesley & Cordelia's issue here?
Please give it a listen and let us know what you think
Once More, with Podcast Episode 19: Stormtrooper Shooters' Academy, Class of 2000

*SMG how to keep a successful marriage going - separate credit cards and bathrooms, is the Slayer onto something here? Sarah Michelle Gellar reveals key to her 15-year marriage | Daily Mail Online

*She also can't get enough of the Cruel Intentions musical!
http://instagr.am/p/BcywPcAjwoF/
*Who's watching The Runaways? Some are saying it's James Marsters' best performance since Spike, don't miss out! Here are some interviews with James you might want to check out

*Tis the season, let wee little SMG warm your heart with a Christmas Commercial from the 80's

I grilled some of you about Christmas and New Years, Christmas wishes and gifts range from chocolatey Spike puppets Shanshuing on Scandinavian Cruises... or wait... better just let you read for yourselves!

1. Name one thing you want for Christmas this year?
2. You get to give one present to a Whedonverse character - to whom do you give a present and what do you give?


TriBel said:
1. Name one thing you want for Christmas this year? I asked my lads for a Spike Puppet - I don't particularly want it but I liked the inconvenience searching for one would cause them (I'm a bad mother). They've offered to pay for a Scandinavian Cruise instead.

2. You get to give one present to a Whedonverse character - to whom do you give a present and what do you give?

I've got a signed, first edition (numbered run) copy of e e cummings' Eimi. I'd give it to Spike.
Click to expand...

WillowFromBuffy said:
1. Just give me chocolate. I have so much clutter. Don't give me any books I won't read, novelty sex toys, figurines, candles or bath products. Unless you know me well enough to figure out exactly what I would like, give me something that is edible and consumable.

2. I would sneak into Will's room during S6, steal her bagel-journal and give to Tara. On the card I would write, "She stole one bad memory but kept all of these." Would that work? That would work, wouldn't it?
Click to expand...

dcai0830 said:
1. Name one thing you want for Christmas this year?

A killer Season 12 BtVS/Angel comics, written by Joss himself, with an interesting and well thought out story for both our heroes. Extra points if there is a Buffy/Angel reunion!

2. You get to give one present to a Whedonverse character - to whom do you give a present and what do you give?

I’d like to give Angel his Shanshu because the guy could really use a break!
Click to expand...

Nix said:
1. Name one thing you want for Christmas this year?
For my daughter to be happy with her gifts this year (that's be great lol). She should be a happy bunny as she is getting a computer!!

2. You get to give one present to a Whedonverse character - to whom do you give a present and what do you give?
I give Faith the best present in the whole world and one I know she'll love....
Me!
Click to expand...

1. It's the New Year's Eve countdown, you're at a party with only Whedonverse characters - whom do you wish to kiss?

2. Do you have a resolution for the new year?


Fool for Buffy said:
1. Buffy, but hard to go wrong with most of them.

2. Work to maintain a social life.

HowiMetdaSlayer said:
1. It's the New Year's Eve countdown, you're at a party with only Whedonverse characters - whom do you wish to kiss?
Willow - of course!
2. Do you have a resolution for the new year?
Take a real vacation this real - preferably some Mayan ruins!
Click to expand...

PaulParmar1 said:
1. I would love to kiss Spike at the New Year's Eve party. Who doesn't love a hot reformed bad boy vampire?

2. My New Years resolution is to focus on myself and try to stop caring so much about what other people think
Click to expand...

Big thank you to all of you who responded, and the rest of you, feel free to fill in your own answers below!


Quote of the month

White Avenger in Question - Would Angel have killed Connor?

white avenger said:
If Angel was faced with what he considered to be a sufficiently dire circumstance, where the only possible choice would be killing Connor and saving the world, or saving Connor and letting the world be destroyed, he would do exactly the same thing that Buffy did to him at the end of Season 2. If for some reason, the only way to save Connor would be to sacrifice his own life, the way that Buffy did for Dawn in Season 5, he would do that. Angel loves Connor. He is his miracle child. But above and beyond all else, with all of his faults and shortcomings, Angel is every bit the Champion, and he will always do what the Champion should do. To say that he would do anything other than that only belittles the character.
Click to expand...

WillowFrom https://buffy-boards.com/threads/thoughts-on-sandbox-scene-from-restless.71866/#post-1316806Buffy said:
Willow, Xander, Giles and Buffy are all facing their fear. In order to understand these dreams, you need to understand what each character is afraid of. Since this is Xander's dream, it is all about his fear. Xander is afraid of being left behind by his friends. He is stuck in his parents basement and is unable to find a job that will enable him to move out. A shark needs to move forward to breathe. Xander is either not a shark, because he is standing still, or if he is a shark, then he is dying, because he can't move.

The Giles scene may have made more sense for Willow, as I always thought it was only her who was looking to adopt Giles as her substitute father. However, it is not inconceivable that Xander may have had a similar desire. In the dream, the honour of being Giles's protegee has gone to Spike, Xander's least favourite person. Xander claims he doesn't care, because he has other things going on now, but he sounds less than convincing.

A watcher scoffs at gravity. Giles and Spike are obviously going to do exciting stuff together and there are few limits to what they can do. Xander does not scoff at gravity. His feet are stuck where they are.

Buffy tells Xander she is way head of him. Movement and the fact that Xander is left behind by his friends are mentioned several times in the scene. Buffy is growing as a person. She is in college. Xander is trapped in suspended animation like a shark on land and hasn't managed to do anything with his life during the past year.

Buffy is playing in a sandbox that seems small but is actually a vast desert. That she is playing may signify her confidence and the seeming ease at which she goes about her task. The desert is a dangerous place. Jesus went to the desert to be tested by the devil. Something similar happens to Buffy in her own dream when she faces Sineya in the desert. Xander expresses worry for Buffy, but she simply shrugs him off. She does not need him. Xander is not important to her.

The ice cream truck represents the unimpressive jobs that Xander has taken over the year. Selling ice cream is not going to help him out of the rut he is in.
Click to expand...

AnthonyCordova said:
This is such an underrated episode. I just recently rewatched it, and I wanted to remark that I actually had to stop, because I had an empathetic connection with Giles and felt embarrassed on his behalf, as if I had seen a side of him and his personal life that I shouldn't have. Giles is emotionally put on display and made vulnerable to the audience. It was a little too much for me this last episode. But it's a great episode, and one that is often overlooked in threads discussing the best episodes of S4, or on lists of best stand alone episodes.
Click to expand...

And how cute is this? Mr. Gordo + Angel = the truest loves of all! 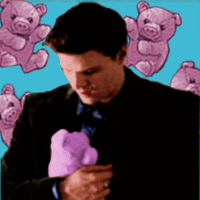 Blast from the past
Remember when Buffy and Gwen got together to chat about Angel and oh... right... that was only in my head. Anyway, here's Sarah Michelle Gellar and Alexa Davalos looking gorgeous 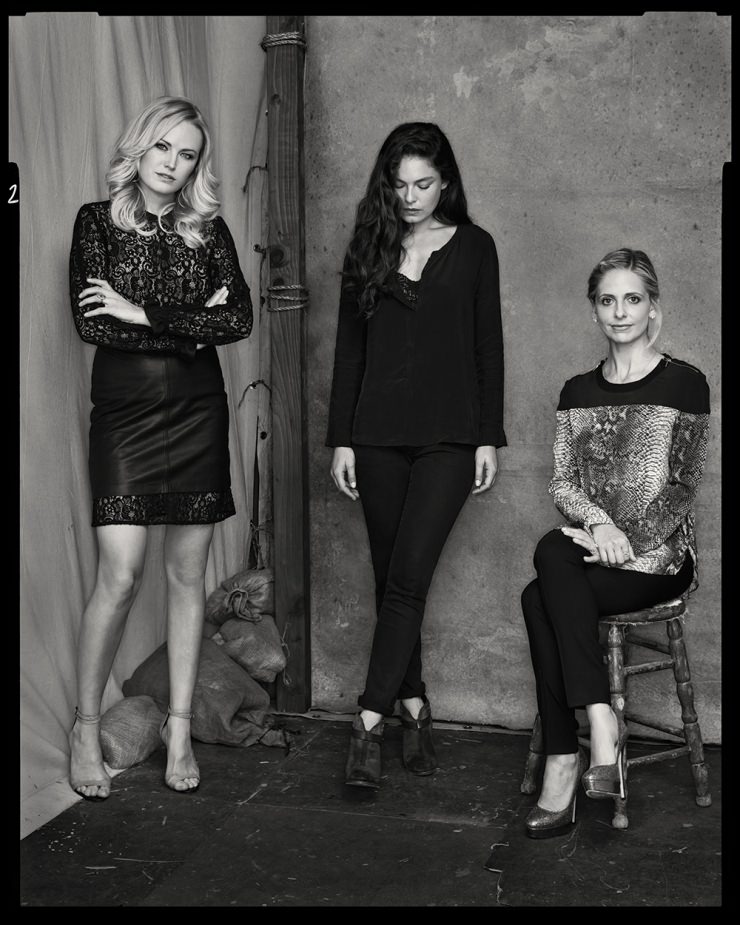 Also, remember these old Buffy sweepstakes? Now that would've been fun to win!

That's it for this issue, ta-ta for now! Leave your comments below! 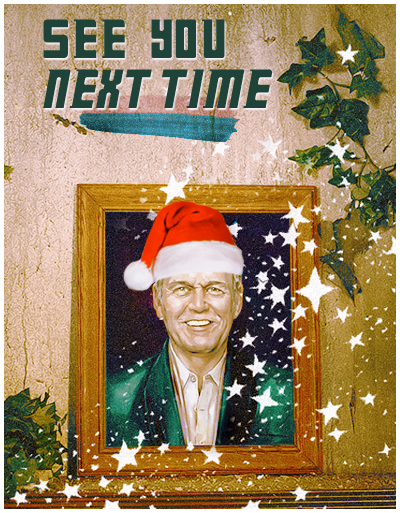 And a huge thank you to @GwenRaiden for the stunning art made for this newsletter! You are Santa Clause in disguise!

Black Thorn
Gangel made the newsletter. 'Tis Christmas after all.

My arse is not pansy!